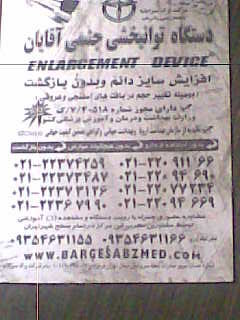 Previous Next
← previous day next day →

I've received thousands of spams about penis enlargment and seen so many ads about it on the web, but I never expected to see such an advertisement on a public bus in Tehran. strange enough it says it's been approved by health officials.